i LOVE my family. 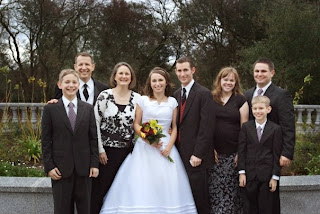 The past few days have been a little rough going, and I just need to give a little shout-out to my family of lifesavers. Any situation that arises, I know I have a team of supporters there to rally around me and make me feel like a million bucks. Ever since I can remember, all I had to do was say the word, and I have a flood of phone calls and emails and voice mails and cards helping me get through any tough time, or to tell me that I had done a great job. I remember a day that I had had a disagreement with a boyfriend, and I was telling my mom about it. Not five minutes later, my brother had called me and invited me to have a bbq with him and Hannah, and they just spent the next 5 hours telling me how wonderful I am. I am terrified that now I will be moving even further from them, and that those nights will become less frequent, and more far between.
They really are the best. I can only hope that I can be that kind of friend and support to them.
Christian is so lucky to have married into the most wonderful family on this side of the moon. I may be a little biased, though. 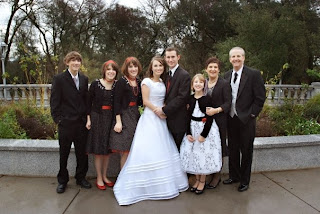 And it wouldn't be complete without a tribute to my "new" family, who has welcomed me in with open arms. I have become such great friends with the girls, and have such a great time with them. How many could be boring fridays have been spent at the dollar theaters, giggling the afternoon away at the latest and greatest new chick flick? And Ethan, of course, has been my hero. He is the greatest brother in law ever. And, I like to think, my friend too. I have learned so much since joining th family, from What Not to Wear to where to put the silverware! Its been a wild ride, but we will miss you guys so much!