"Shoot him and cut out his tongue, then shoot his tongue! And trim that scraggly beard!" 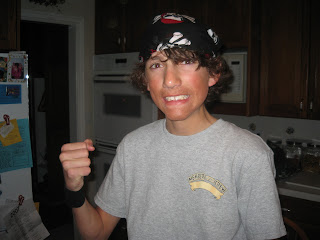 This one goes to the nice guy! Ummmm...thats the guy with tattooed beard in the left picture. Wait, who is that anyways? Oh yeah, thats my brother, Ethan. I thought I would post a little something about him since he really doesn't get enough credit in this world.

Ethan is my only brother. So you would think that we are best buds, right? WRONG!!! We hate each others guts! Every time I see him, I want to shoot him and cut out his tongue, and then shoot his tongue! Actually, we really don't hate each other. I just said that for Ethan's benefit, in the event that he actually does read this blog. But I would have to say that our relationship is similar to that of Shaggy and Scooby Doo. I don't know who is who, but I'm sure you, the reader, can make some kind of assumption to who's personality matches best. Actually, I don't know who you could really compare us to. I think we are just unique all on our own. Of course, I would love to say that our relationship is like that of Hyrum and Joseph Smith's, but I don't know of anyone that could come even close to the unconditional love that united them as brothers.

Ethan is an amazing guy though. You could throw poop on him and would still hug ya,"Ethan, please, don't touch me." He is the nice guy in the family. He puts up with every ones crap. If you tell him to do the dishes by himself, he would do it. If you tell him to go clean up Cyrus SHEET in the workroom, he is down there cleaning away. But it doesn't stop there with doing dirty chores. The part that sticks out to me the most about Ethan is his genuine kindness to others. When Lisa and I lived in our funny old basement in Sandy, Ethan would stop by all the time. Usually he was on his way or on his way back from the library. But there were many times when we were his only stop. He really impressed me one time when Lisa was sick and at home alone. Ethan, being the super hero that he is, rode his bike to our place, in the cold of winter, just to check up on Lisa. Lisa really appreciated the surprise visit and it made her feel a little better, just knowing that she had a friend who cared.

Ethan doesn't look for thanks or attention when he does things like this. I'm sure there are many others that have experienced Ethan's kindness and genuine concern and noticed that he doesn't look for any type of reward. I don't quite know what drives him or what motivates him. All I know is that one day he is going to be a billionaire tycoon and he is going to take care of all of us. That's really all I know. But whatever he ends up doing in life it will involve his ability to affect.

So to finish up my ode to Ethan, I want to say to him that I love him. And I don't say this because he is cool or because he is a great biker or mountain climber. I say it because I appreciate who he is and what he does. He is not only my blood brother, but my good friend. And I'm not just talking about one of those friends that you do crazy stuff with, like yelling "Nudity" out the car window. Though we have done that. I'm talking about one of those friends that motivates you, without saying a word, to be your best self. That's what Ethan is to me. And of course a lot of people have that affect on me, including Lisa. But sometimes it can be really special when it comes from your younger brother. (This would be a good time to say Happy Birthday, but Ethan's birthday is past already.) So here is to Ethan and the good man that he is!!!

Posted by Christian at 1:11 PM

What a good brother....Christian, you are a good writer!