Have you heard my husband's morning show? "Wake Up With Flem?" 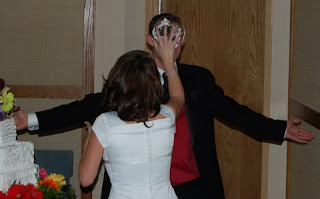 Our one-year anniversary happended to be yesterday, the 5th of January. Which was also the day I started the spring semester. So besides starting new classes, it was a pretty uneventful day. But little did Lisa know that I had made dinner for the two of us...which actually was not that thrilling, accept for the idea I had to put orange fruit wedges in the chicken. I thought it was pretty clever.

We actually celebrated our anniversary over the weekend. We had been given a one-night stay at the Hilton Garden Inn in Layton, so thats where we went to party...in Layton. It was actually pretty fun despite all the ice and snow. When you are with your best friend in the whole wide world, it doesn't matter where you are or what you are doing, it is always great. Especially when your best friend slips on the ice and falls on her butt. That is ALWAYS great! Actually, I felt really bad and escorted her across icy parking lots the rest of the weekend.

I can't tell you how Lisa feels about me after one year of marriage. Frankly, I'm surprised she hasn't decided to go back to her maiden name. Especially since it takes her 5 minutes to actually write her name now! Lisa Niederhwdndweeljkiiii%^>djnf7er. How the heck do you even say that?!

However, I CAN, in a way, tell you how I feel about Lisa and I feel about us together. Not everyone gets to experience what I experience each day. Unless you also have a heated mattress pad, then you know how tough mornings are in the winter. But its not just about the heated mattress pad and sleeping in later than we planned. Its also about the other things we do together. And I think that's my favorite part about Lisa, its that she is someone I can't imagine doing something without. Of course you won't see Lisa in a white water kayak right next to me, or bombing down the porcupine rim trail in Moab. The things I can't imagine doing without her are the small things like banging my knee on something. If I were to bang my knee on a desk without her, it would just be painful. But if she was there to see me bang my knee on the desk, then it becomes Comedy Central and another hour of conversation.

We had our wedding cake last night after dinner. It would of been just dry cake if Lisa wasn't there to laugh and talk with me. She may wonder sometimes what it actually is that makes me love her. I can't say or write descriptive words that will tell it all. All I can tell her is how great it was for her to be there when I banged my knee. All I can write to her is about that time we played in the first fallen snow in October. Its those things I think about when she asks me, "Why do you love me?" And to me, that's everything.

Posted by Christian at 1:23 PM

I can't believe it's been over a year since that dark and dreary day!!! hahahahahahahahahaha. Seriously though, it was warm and beautiful in the temple. We love you both with all our hearts, Mom and Dad